The 2020 Ducati Streetfighter V4 S bares its MotoGP-inspired guts like a mechanical exhibitionist. Based on looks alone, this menacing hunk of postmodern sculpture presents itself as a bruiser of a bike. But after several days of wrangling the self-proclaimed pugilist through Los Angeles canyons, Ducati’s latest turns out to be a surprisingly different animal than its sharp-edged appearance might suggest.

Before we saddle up, let’s trace how this 208-horsepower, two-wheeled alien crashed planet Earth. The Panigale V4 was introduced in 2018, a superbike that marked a seachange with four cylinders arranged in a V, replacing the brand’s much-adored twin-cylinder configuration. By ditching the Panigale’s fairings that hide the mechanical bits, new Streetfighter shifts the superbike into a more street-friendly direction, making it more approachable for everyday use. The handlebars have been lifted and widened for a more relaxed body posture, and the seat gains padding for a more accommodating ride. The four-cylinder engine produces slightly less power at the crank: 208 vs 214 hp, 90.4 vs 91.5 pound-feet, but this isn’t a watered-down redux: the Streetfighter’s shorter gearing actually yields more torque at the rear wheel, while two pairs of winglets produce 61 pounds of downforce at 167 mph. 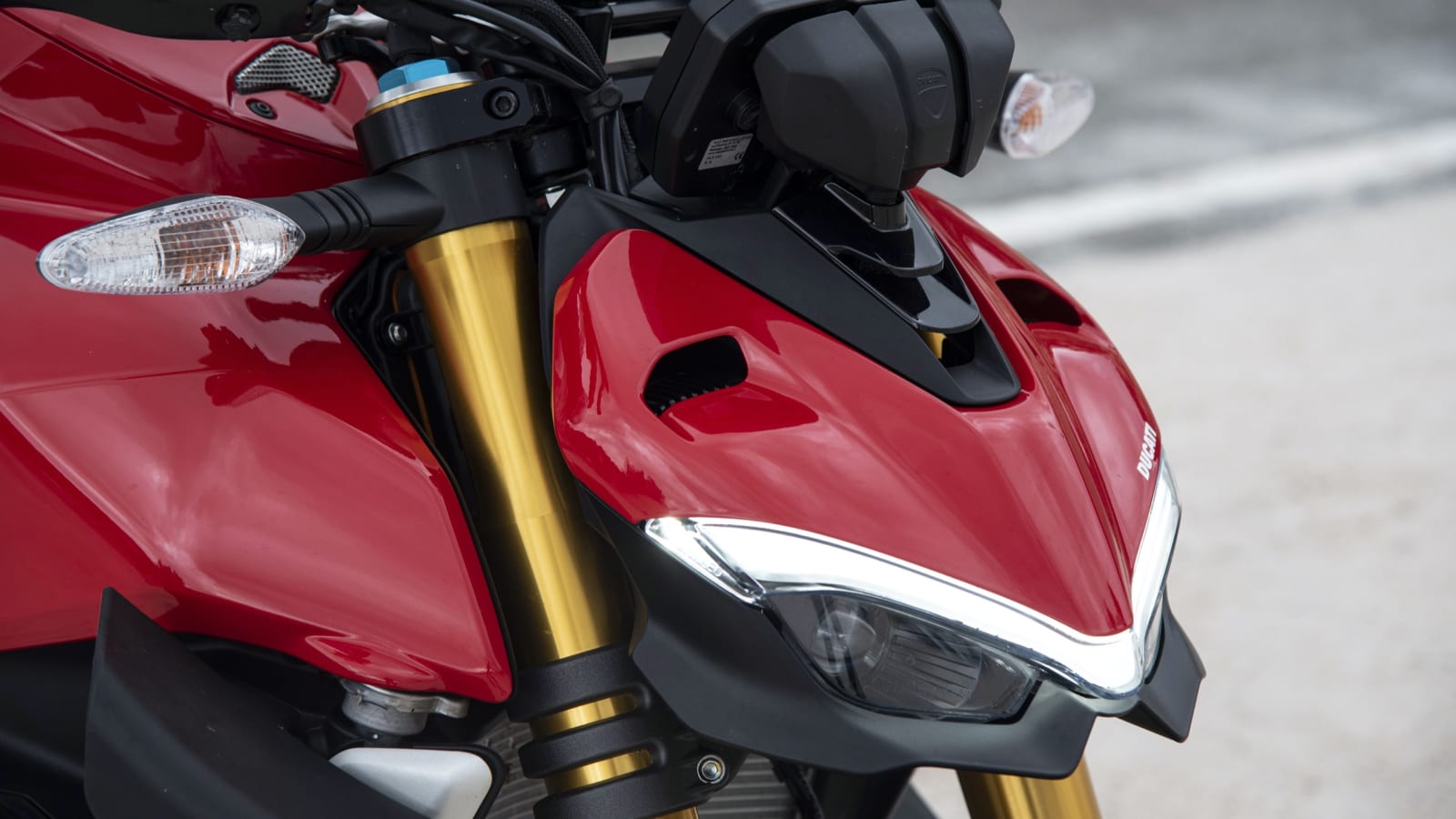 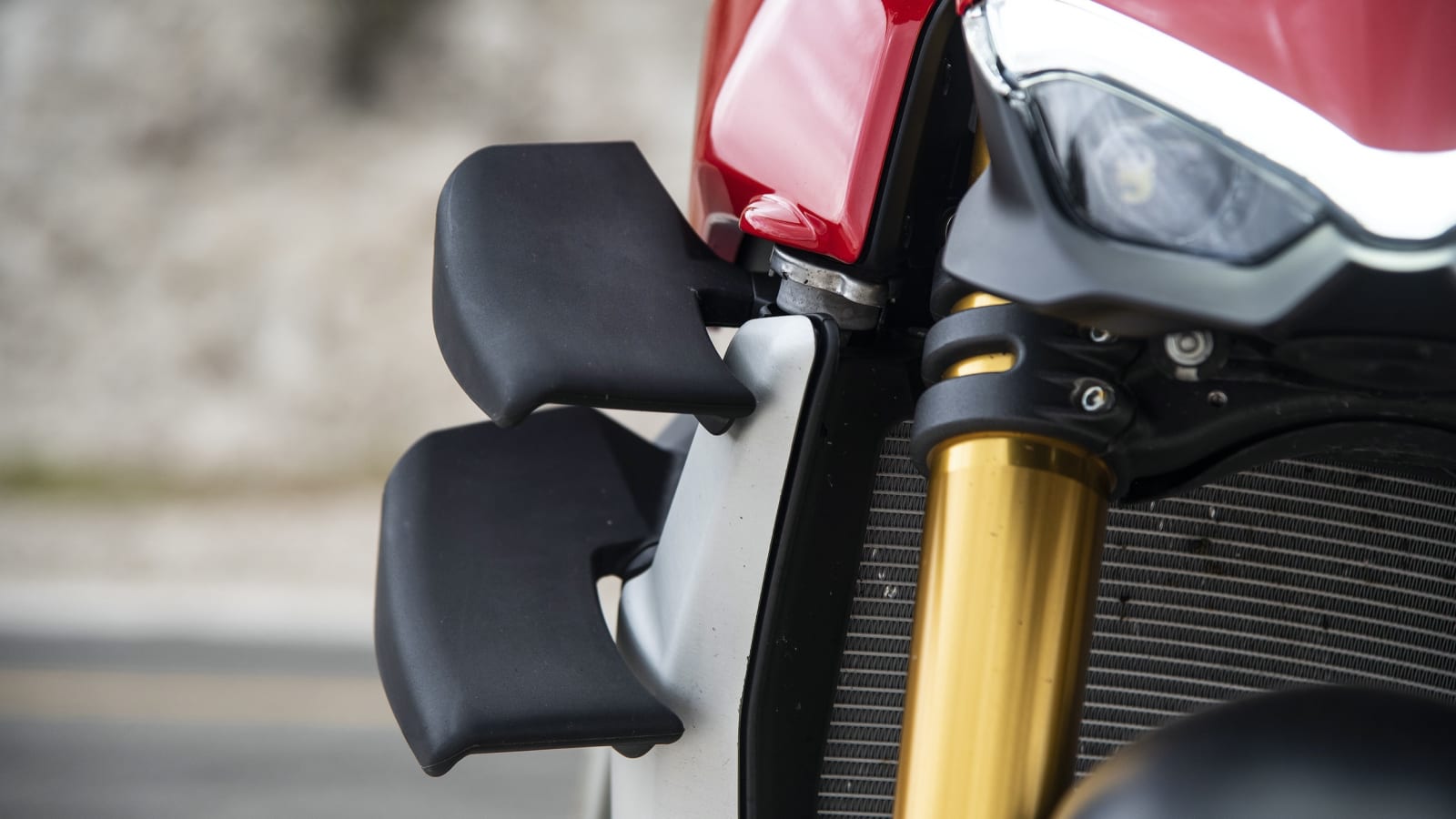 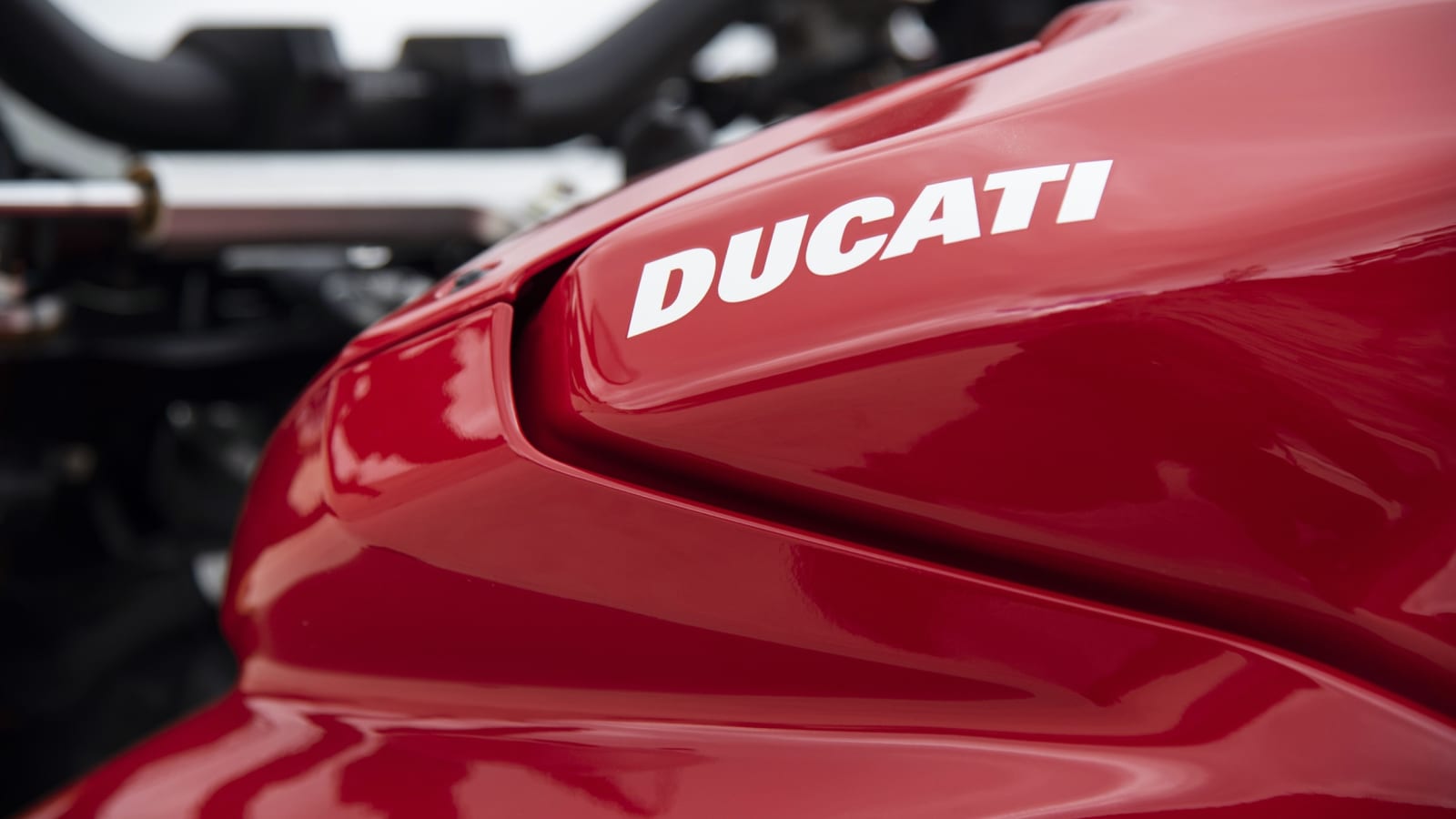 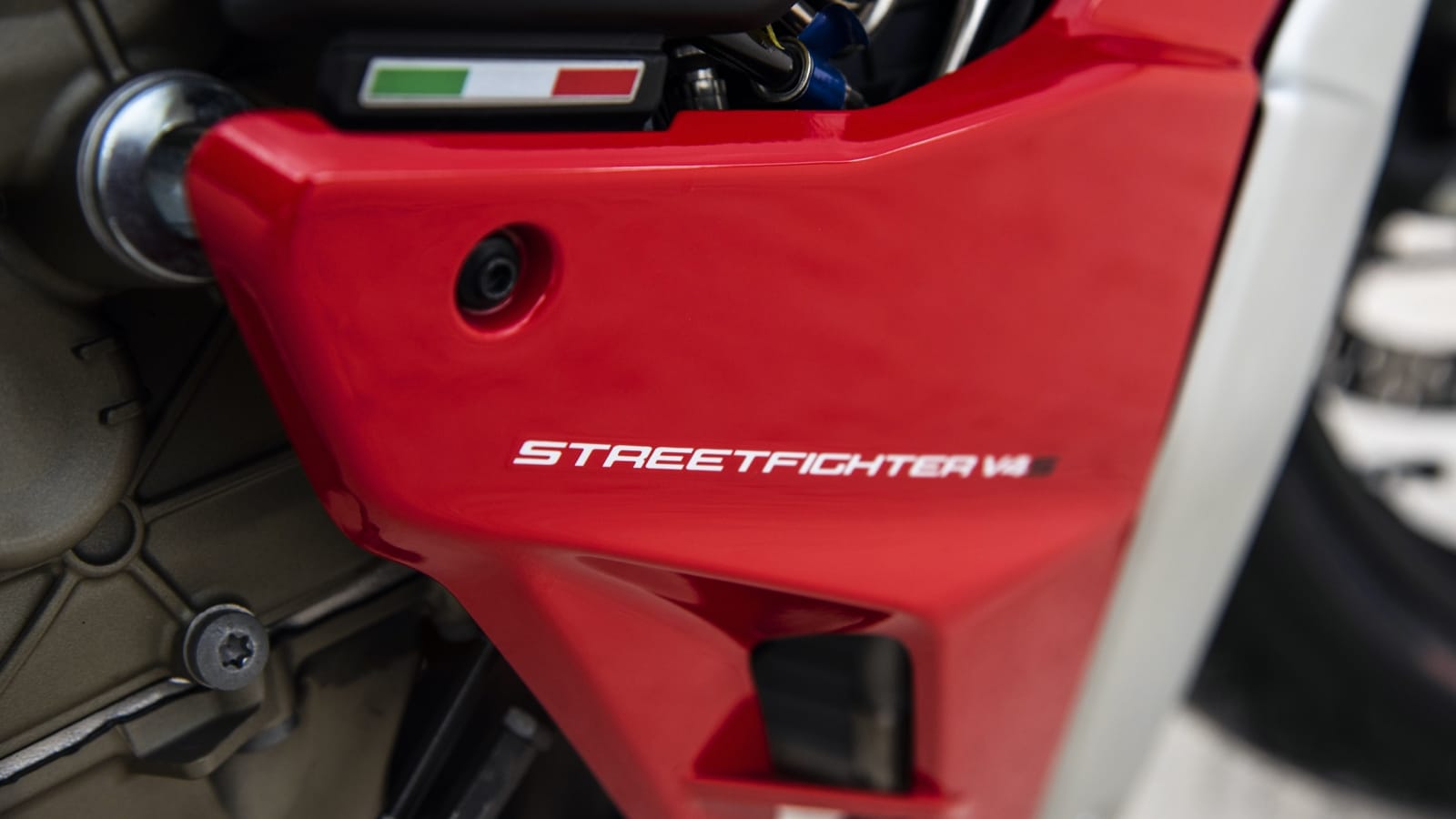 None of the Panigale’s sophisticated electronics are lost either, including a six-axis sensor that detects yaw, roll, and pitch angles to optimize power delivery, traction control, wheelie control, skid control, and launch control. The $23,995 V4 S model (which commands a $4,000 premium over the standard V4) adds forged Marchesini wheels and electronically controlled Öhlins dampers, which can be manually overridden for preload, compression, and rebound settings. Also included with the package is an electronic steering damper to smooth out high-speed tank slappers.

In person, the Streetfighter stirs a fair amount of controversy. Neither as organic looking as Ducati’s seminal Monster nor as lean and mean as the Hypermotard, the Streetfighter comes across as a strange offshoot from the two, with its tiny, LED-enhanced beak shoveling a sharp streak up front while a jagged radiator shroud precedes the exposed motor bits. Ducati calls it a “Joker” face, but let’s just politely say it might not be everyone’s cup-o-tea. While the twin winglets look cool, they’re also plastic and have visible seams revealing the edges of the injection molds; a bit of a bummer, given the premium price point. Imagine a supercar’s signature design element — say, the side blades on an Audi R8 — without the reassuringly expensive-looking finish. Other features are hit and miss: for instance, the radiator shrouds are nicely finished brushed aluminum, but the instrument cluster is constructed of a vulnerable feeling fusion of plastic parts.

Climb aboard, and the Streetfighter feels comfortable, purposeful, and somewhat larger than the superbike it’s based on mostly because of the wider, more upright handlebars. While the 1,103cc powerplant fires up with an intimidating roar, the 33.2-inch seat height is 0.7 inches lower than the Panigale, offering a confidence-inspiring grasp at stoplights — at least for my 32-inch inseam and 5-foot-11 frame. You’d think a two-seat, two-wheeler packing 208 hp and weighing only 439 pounds would be a wheelie-popping handful, but the Streetfighter’s road manners prove admirably approachable. Sure, there’s a staggering amount of power on tap with a simple twist of the right handgrip, but that forward thrust isn’t accompanied with the wheelie-popping tendencies of its fellow Italian arch enemy, the Aprilia Tuono V4 1100. Also more subdued: the Ducati’s engine note, which while loud at idle, doesn’t scream with the same volume level as the Aprilia’s. 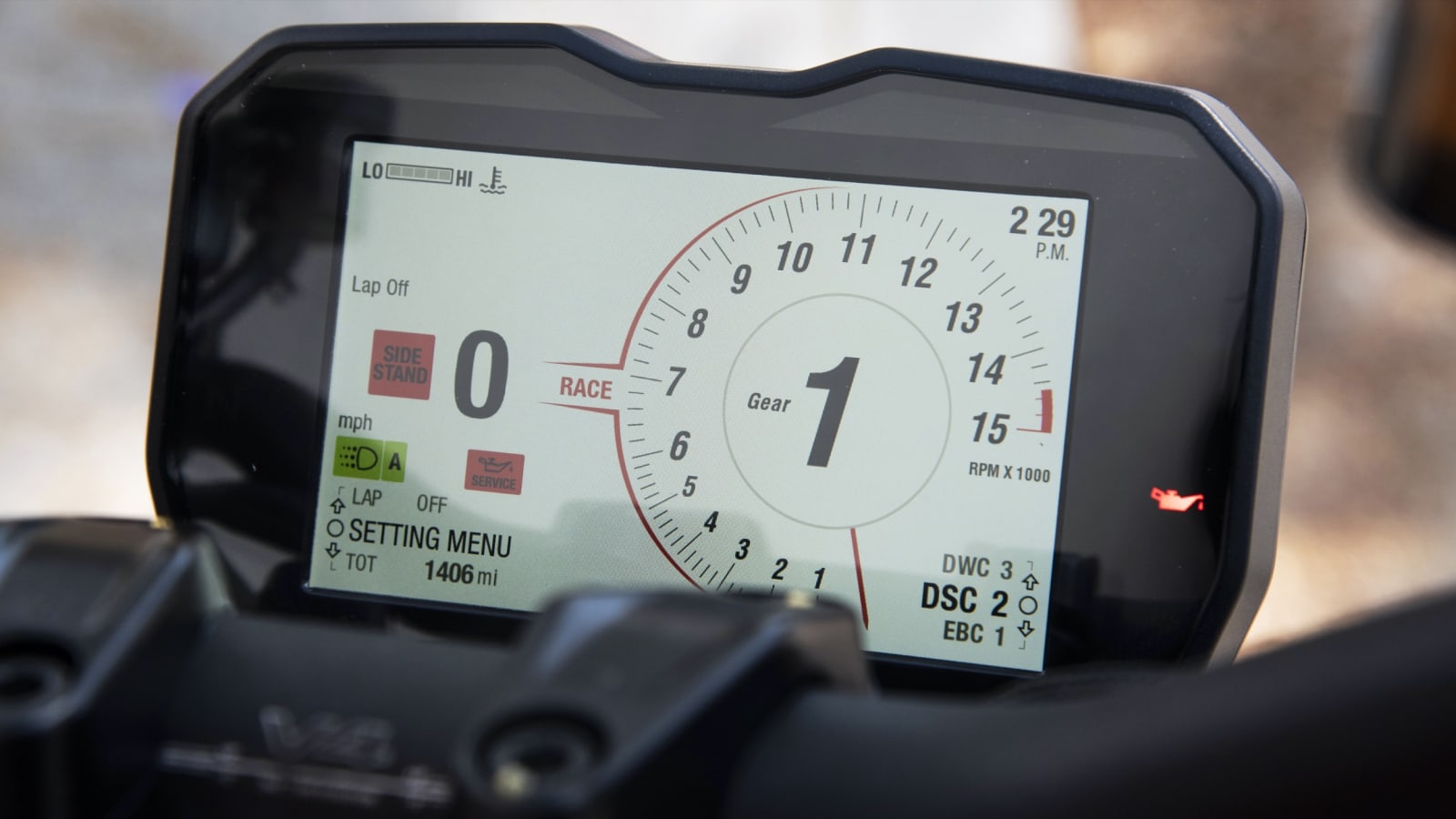 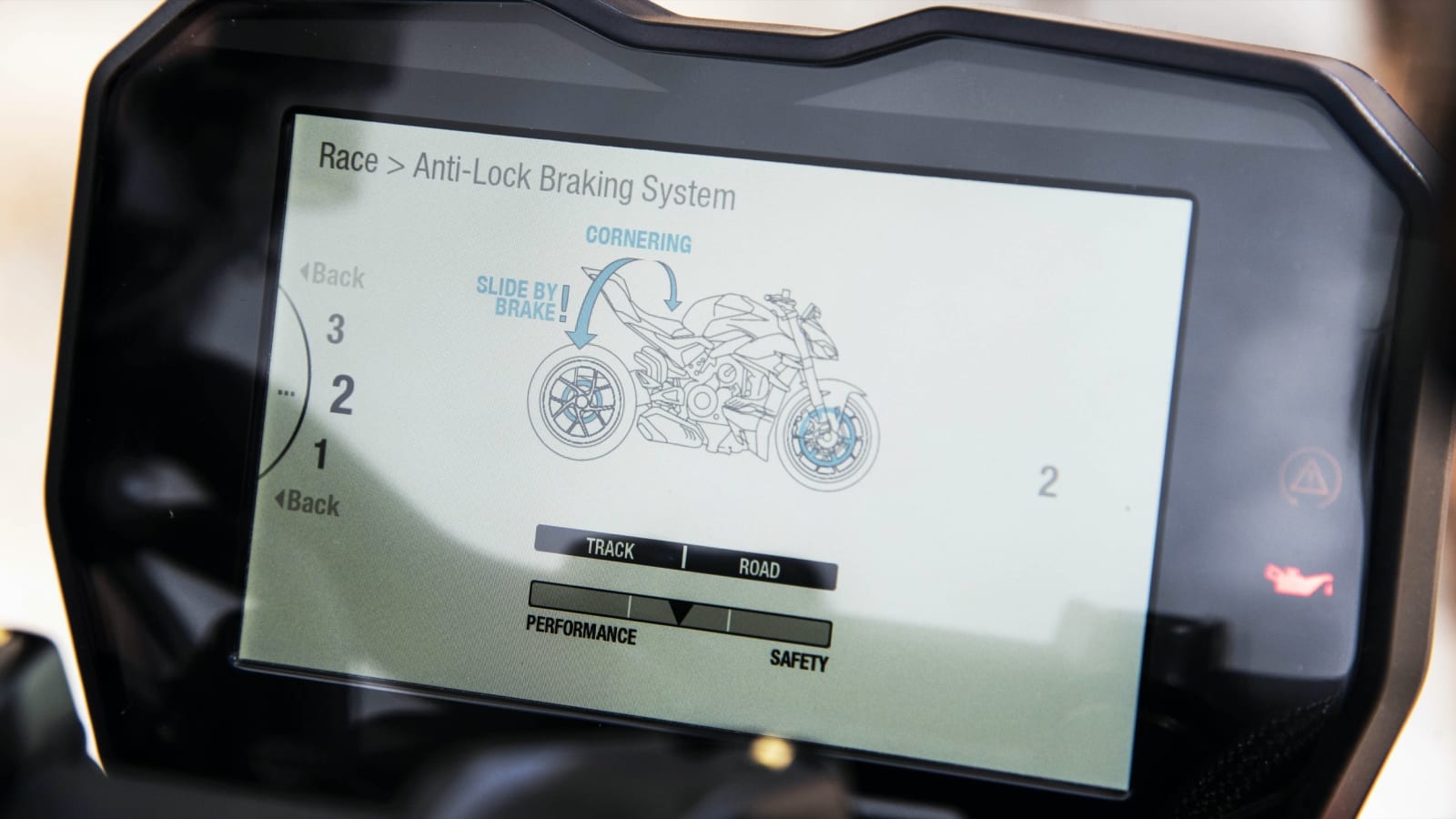 Putting a finger on the Streetfighter’s personality in one fell swoop proves a challenge, primarily because it can be configured in so many different ways. While three preset ride modes — Race, Sport, or Street — can be selected by holding down the mode switch, delving into submenus reveals a dizzying array of options. Want smoother power delivery but more engine braking? How about restrictive wheelie control but more lateral sliding ability? Perhaps you’d like to disable Ducati Quick Shift (which enables clutch-free gear swaps) and turn off ABS … or maybe individually adjust the 32-level compression/rebound suspension calibrations, or set-and-forget the front and rear dampers to an automatically adaptable setting. It’s all there in the switchgear controls, which manipulate clearly rendered pictograms via the 5 inch display up front. When you’re not fiddling with the settings, a clearly visible tachometer dominates the screen, which flashes red as it approaches max revs just past 14,500 rpm. There’s even a launch control system that modulates power delivery as you slip the clutch, with a built-in mechanism that protects the clutch surface by limiting the number of consecutive hard starts.

All of this technology is dandy if you’re into fine-tuning your riding setup, and there’s a perceptible feeling of difference if you stop, readjust, and continue on your way. But it’s just as well to select ‘Race’ mode and attack the canyons, allowing the suspension to dynamically adjust as you negotiate an aggressively twisty road. 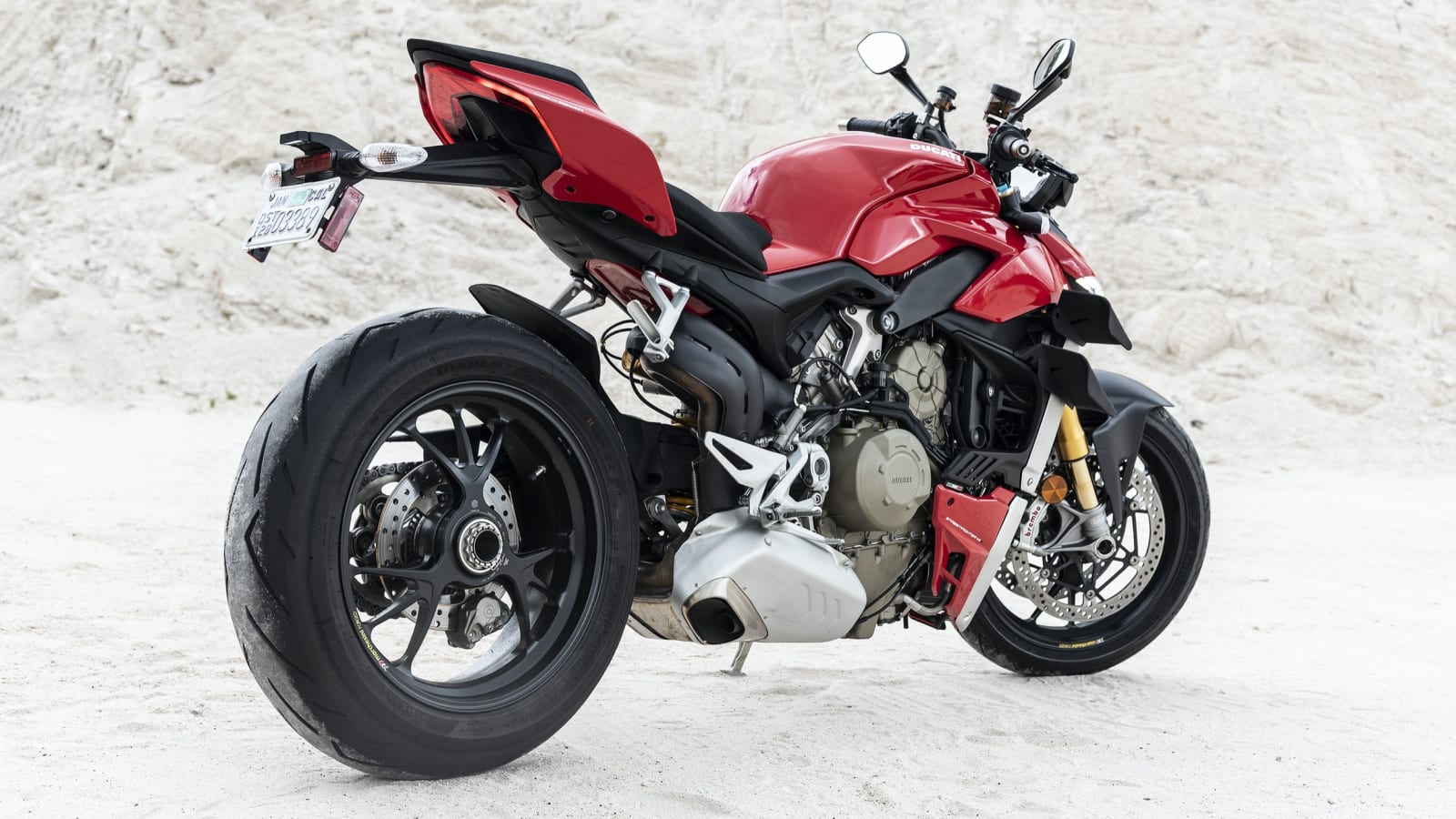 Not surprisingly, the engine has a remarkable pull as it stretches its legs, offering an extremely broad range of revs as it continues its way up to the last few thousand rpm. However, more impressive is how tractable the V4 feels leading up to that ultimate endpoint; throttle response is easy and intuitive, power delivery is linear, and there’s so much torque on tap that you rarely feel the need to drop more than one gear to access enough oomph to catapult you towards the horizon. The suspension generally feels well composed, though some larger mid-corner bumps can have the tendency to upset the chassis. Shifting the six-speed is a pleasure; simply kick the lever up or down without grabbing the clutch (except when going into first gear from a standstill), and the Ducati Quick Shift system delivers smooth, uninterrupted power to the rear wheel, even rev-matching for downshifts. The brakes are also crushingly effective, offering good feeling and outstanding stopping power.

While the Streetfighter’s bite certainly isn’t as fearsome as its bark, this is still an ultra-high performance motorcycle with an exceptional skill set. Perhaps more notable, however, is how easily accessible those traits are: thanks to its comfortable riding position and approachable power delivery, the Streetfighter opens up a level of usability that is miles apart from its superbike stablemate. Enthusiasts — myself included — will quibble over the styling, which may prove a bit too razor’s edge for some. But riding purists seeking an immensely capable motorcycle that’s comfortable enough for all-day canyon carving sessions should find complete satisfaction in Ducati’s Streetfighter.