It was Portimao perfection for Monster Energy Yamaha MotoGP’s Fabio Quartararo as he eased to a first win of 2022 and the World Championship lead at the Tissot Grand Prix of Portugal. In a day to remember for France, he was joined on the podium by Johann Zarco (Pramac Racing) in second, whilst Aprilia Racing’s Aleix Espargaro benefitted from late drama involving Joan Mir (Team Suzuki Ecstar) and Jack Miller (Ducati Lenovo Team) to take third. Quartararo is now the Championship leader, although he is tied at the top on points with Team Suzuki Ecstar’s Alex Rins, who put in arguably the ride of the day by recovering from 23rd on the grid to finish fourth.

Off the line it was Mir with the perfect launch, firing clear of the rest of the grid to take the holeshot. Another strong start came from Quartararo who quickly moved through on his compatriot Zarco to take second halfway around the opening lap. Meanwhile, further back, Alex Rins had somehow launched his factory Suzuki up an incredible 13 places on the first lap to go from 23rd to inside the top ten.

At the front, it didn’t take long for Quartararo to get into his rhythm. The Frenchman was flying and had quickly reduced Mir’s early advantage down to nothing before then, at the start of Lap 4, he made his move on the 2020 World Champion at Turn 1. Mir had no response and Quartararo was leading a race for the first time this year.

Nobody could match the metronomic pace of the reigning World Champion and he edged further and further into the lead. He set a new fastest lap of the race and Portimao lap record, a 1:39.435, on Lap 10 by which point Mir had thrown in the towel and was looking over his shoulder in the fight for second. Quartararo would eventually cruise across the line over five seconds clear of second place for his first victory since the British Grand Prix in August of last year and, as a result, he jumped to the top of the MotoGP™ World Championship.

DRAMA IN THE PODIUM FIGHT

It was much closer in the fight for the final podium places with Mir defending hard as Zarco applied more and more pressure. The Frenchman took advantage of a tiny error by the Spaniard out of the final corner to power past him down the start-finish straight and take second. However, he ran wide at the opening corner allowing Me to swoop back through. A lap later Zarco got the job done, again capitalizing on a small wheelie by Mir out of the final corner to dive through on the brakes into Turn 1.

Six laps remained, with Jack Miller now challenging Mir for third, when the moment of the race took place between the usual sparring partners. The Australian pulled alongside the Suzuki man down the start-finish straight and they side-by-side on the brakes into the opening corner when the front-end of Miller’s Ducati let go. Down went Miller and he took an innocent and unsuspecting Mir with him. The pair, thankfully, are both OK despite the frightening collision. 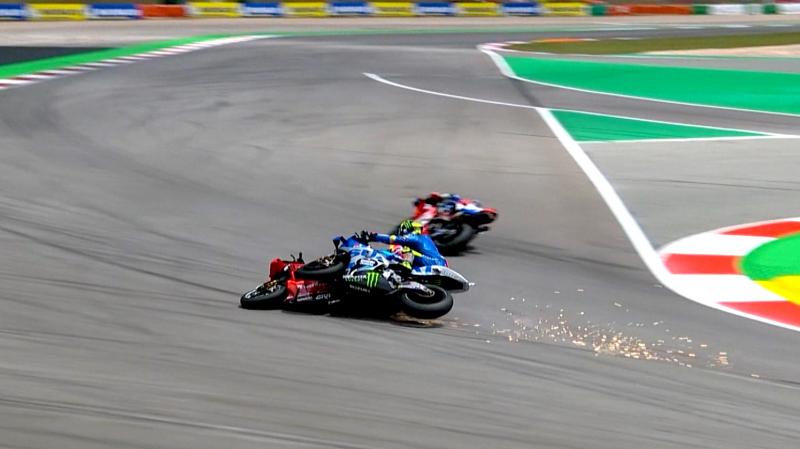 That elevated Aleix Espargaro to third as he eyed only the third MotoGP™ podium for Aprilia. The Argentine Grand Prix winner closed onto the rear wheel of Zarco on the final lap but couldn’t find a way through. Zarco took second, the thirteenth of his premier class career, and Espargaro had to settle for third.

Fourth across the line was arguably the man of the day: Alex Rins. A quite incredible performance from the Suzuki factory man saw him come through 23rd and, in doing so, lifted himself to equal points with Quartararo in the Championship chase. Another strong comeback rider came courtesy of the home hero Miguel Oliveira. The Red Bull KTM Factory Racing man clinched a top five to bounce back from two crashes on home soil in 2021.

For the first time in MotoGP™ we were treated to a Marquez vs Marquez battle on the final lap of the race. LCR Castrol Honda’s Alex Marquez was holding off elder brother Marc quite brilliantly as the laps ticked by, before then, on the last lap, the Repsol Honda man squeezed his way through to take sixth place by only 0.020 ahead of Alex. Half a second back, Ducati Lenovo Team’s Francesco Bagnaia was gritting his teeth to salvage eighth place thanks to a last lap move on Repsol Honda’s Pol Espargaro. Aprilia’s Maverick Viñales took the final place inside the top ten. 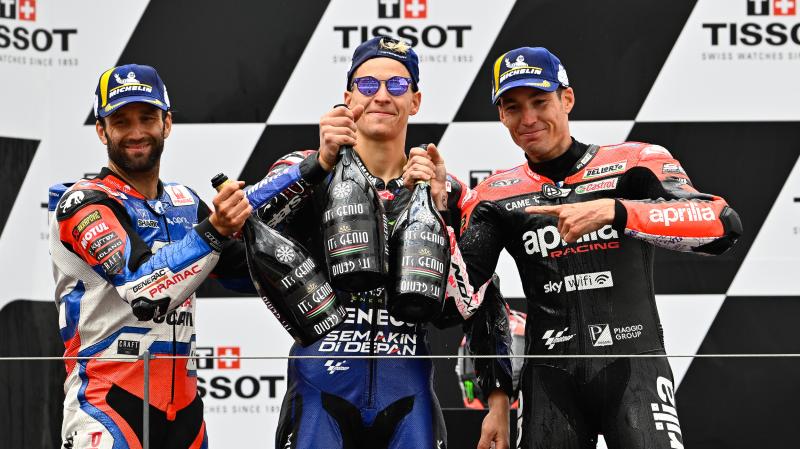